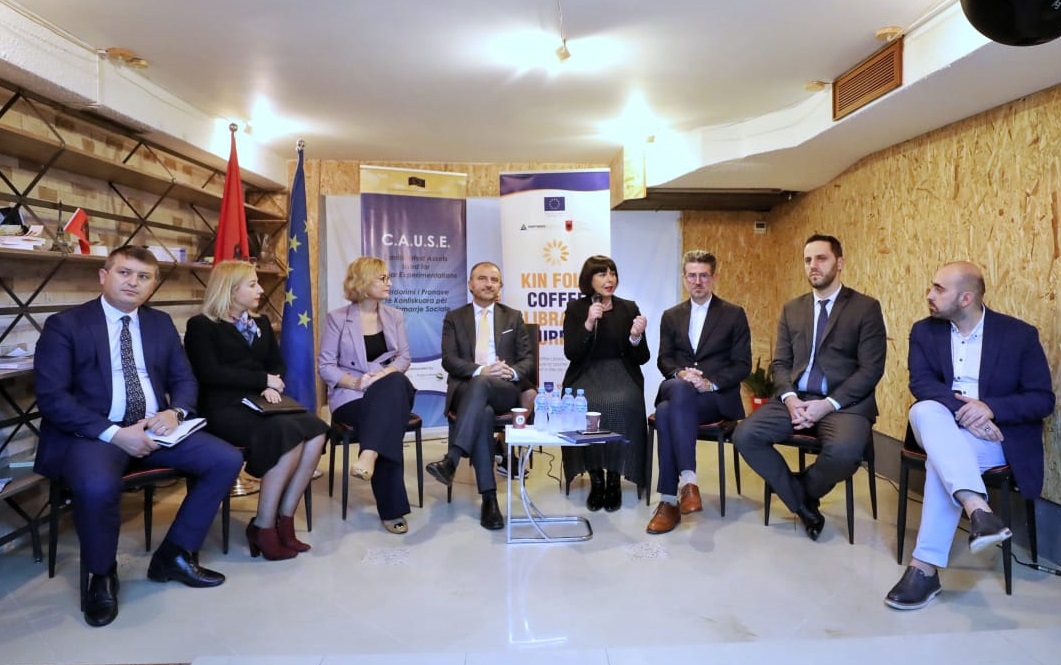 It was inaugurated today KinFolk Coffee Library, the second social enterprise established on a confiscated property from organized crime in the city of Durres, in framework of “C.A.U.S.E. – Confiscated Assets Used for Social Experimentation” project.

Kinfolk Coffee Library – Social Initiative as a measure to prevent youth involvement in organized crime, will be a place where young people from Durres and students of the “Aleksander Moisiu” University, will socialize, read, study and organize various socio-cultural activities. Kinfolk will also support the integration and employment of youngsters part of the Probation Service.

The opening ceremony was attended by Mr. Luigi Soreca – Ambassador of the EU Delegation to Albania, Mrs. Valbona Sako – Mayor of Durres, Mr. Elton Haxhi – Vice Minister of Economy and Finance, Mr. Besfort Lamallari – Vice Minister of Internal Affairs, Mrs. Iris Aliaj – Advisor to the Minister of Justice, Mrs. Juliana Hoxha – Director of Partners Albania for Change and Development and Mr. Artur Kala – Director of the Agency for the Administration of the Sequestered and Confiscated Assets.

“C.A.U.S.E. is a pioneering program for the Western Balkans. We see it as an opportunity for all social actors and public institutions to demonstrate their commitment and determination to the fight against organized crime through the use of organized crime seized assets for social purposes. This is the second venture created on a property confiscated from organized crime after the social enterprise established in Fier, and a third venture will be inaugurated in the coming days in Saranda as well. Only a solid and coordinated collaboration between civil society, local institutions, and law enforcement agencies can move forward this initiative with immense economic, social and political value”– highlighted in her opening speech Mrs. Juliana Hoxha, Director of Partners Albania.

Mr. Luigi Soreca, Ambassador of the EU Delegation to Albania, stated “I saw myself the importance that this kind of initiative can have to re energize the local communities, the local institutions and the civil society, and the message that this kind of initiative can give to the overall public in a country in which the crime is participating in a daily life. The KinFolk Coffee Library will be a place where every person, particularly young people can come and share their ideas in an open place that exercises the right of assembly in a place where normally other activities are taking place. And that`s the ethical of the initiative, to change the purpose and the destination of a place from the situation of a crime into the place that people can live, gather, discuss and progress.”

“This venture is the first of its kind and an innovation for our city. It’s a big change, from a property that comes from a dark origin, now confiscated and turned into a social enterprise” emphasized Ms. Valbona Sako, Mayor of Durres.

“This is a message of support for the justice reform as well, which must happen. Today we gave a taste of justice” stressed Mr. Lamallari, who considered this initiative a triumph in the great fight against wickedness.

The participants in the event – university representatives, students, civil society organizations in Durres – visited the reconstructed premises of the KinFolk Coffee Library and had the opportunity to discuss the opportunities and challenges Albania is facing regarding the social reuse of assets confiscated from organized crime.

“C.A.U.S.E – Confiscated Assets Used for Social Experimentation” is a project implemented by Partners Albania for Change and Development in collaboration with the Agency for the Administration of the Sequestered and Confiscated Assets, and funded by the European Union.

KinFolk was created in collaboration with the Albanian Education Foundation and the Civil Society Development Center in Durres.

KinFolk’s facilities are available to all interest groups who wish to carry out an activity in Durres!