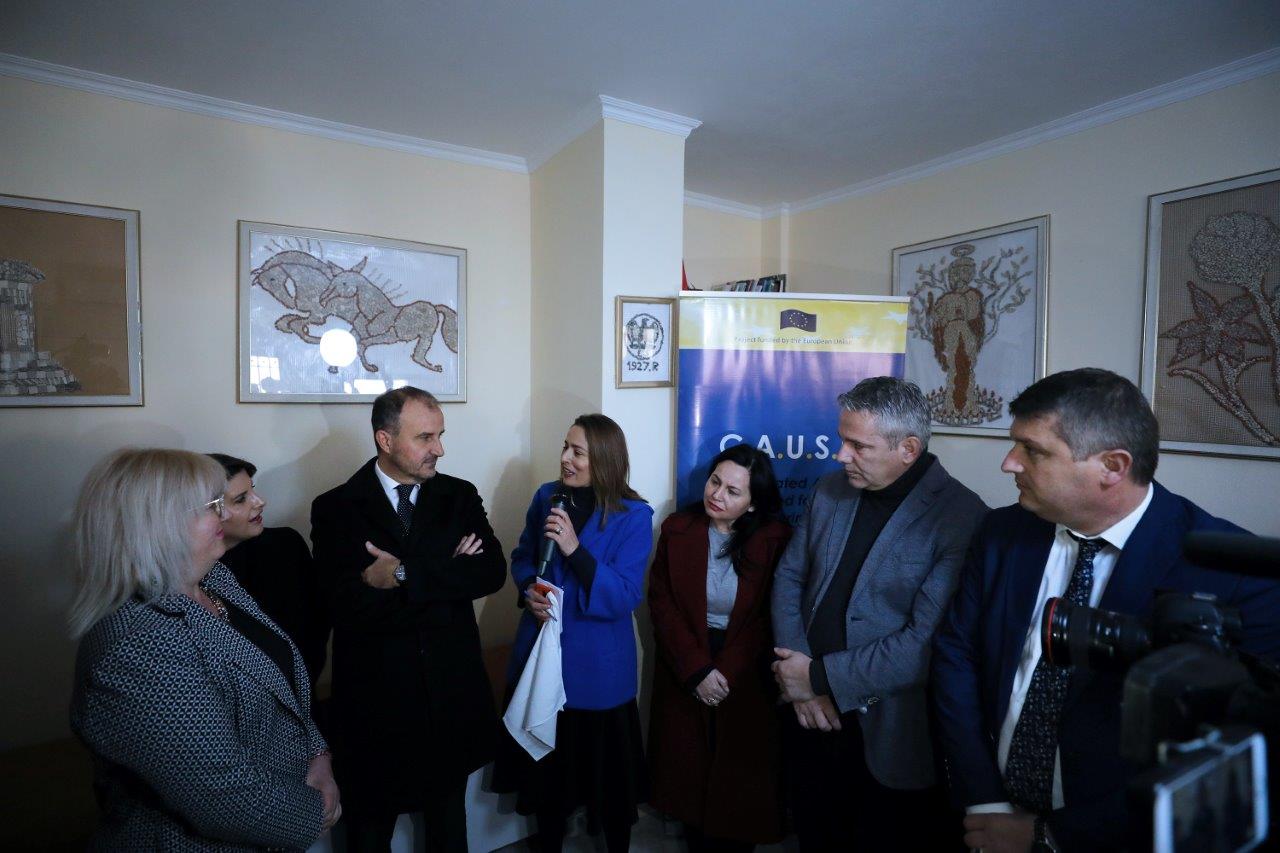 On February 7th, Partners Albania for Change and Development inaugurated the Social Crafting Garage, the third social enterprise established in a confiscated asset from organized crime.

Social Crafting Garage is a workshop set up on a confiscated asset in Saranda, where eight women and girls – victims of organized crime and domestic violence – have been trained and hired to produce handcrafted products using sea stones. Furthermore, Social Crafting Garage will serve as a social hub supporting the re-integration of women and girl’s, victims or at risk of organized crime and domestic violence.

The opening ceremony was attended by Mr. Luigi Soreca – Ambassador to the EU Delegation in Albania, Mr. Adrian Gurma – Mayor of Saranda, Ms. Rovena Voda – Deputy Minister of Internal Affairs, Mr. Erton Kalleshi – Advisor to the Minister of Finance and Economy, Mr. Artur Kala – Chief Administrator of the Agency for the Administration of Sequestrated and Confiscated Assets, other representatives of central and local institutions and civil society organizations,

“After an intense work and a four-year journey, it has been possible for the first time not only in Albania but also in the Western Balkans to open three social enterprises established on assets confiscated from organized crime in three different cities of Albania. The final goal is to give a clear message through these social ventures, that the assets which have been unjustly taken from the community, to be now put in use producing goods and services, providing employment and re-integration opportunities for all individuals and groups affected by organized crime and the community at large, and restoring citizens’ trust in justice and good causes” – said Klotilda Kosta, Director of Programs at Partners Albania for Change and Development in her opening speech.

Mr. Luigi Soreca, Ambassador to the EU Delegation in Albania said that “The European Union considers this project very important, it is a step in the right path to the fight against organized crime, especially in the case of Saranda to the fight to counter violence against women and girls … We encourage the Albanian government to facilitate the social use of confiscated assets and make the process more efficient. We need many other projects like the EU funded projects in Fier, Durrës and Saranda.”

“What is happening today is a response to the criminal elements and at the same time expresses the support and commitment of all public institutions in cooperation with civil society organizations to the full social reintegration of girls and women victims of trafficking or domestic violence” – said Mrs. Voda, Deputy Minister of Interior Affairs and National Coordinator for the Fight against Trafficking in Human Beings.

In his speech, Mayor Mr. Gurma said that “Today is a special day for the social profile of Saranda, as the Social Crafting Garage was added to the institutions of social character… The Saranda Municipality will support this initiative by providing free of charge space in the municipal craft market during the summer season”.

At the end of the discussions, the guests visited the premisses and the handcrafted products of the women and girls. The event closed with the commitment and conviction that this initiative which started with KeBuono Social Pastry in Fier, the Kinfolk Coffee Library in Durres and the Social Crafting Garage in Saranda will continue to expand with other ventures set up on assets confiscated from organized crime.

Social Crafting Garage was created as part of the project “CAUSE – Confiscated Assets Used For Social Experimentation”, implemented by Partners Albania for Change and Development in partnership with Project Ahead and Comitatto Don Peppe Diana and funded by the European Union through the Delegation of the European Union in Albania. Social Crafting Garage is implemented by the Institute of Migration Development and Integration.