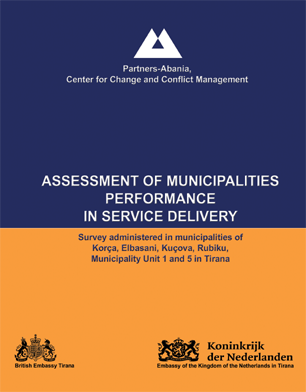 The Assessment of municipalities performance in service delivery was administered by a group of experts from Partners Albania during August–September 2008. The survey was conducted in framework of the project Working together toward a more accountable and transparent local government, aiming to present new methods and tools to cure and prevent corruption in local government. This initiative was implemented in the municipalities of Korca, Elbasani, Kucova, Rubiku and the Municipality Units 1 and 5 in Tirana.

The initiative was supported by the British Embassy and the Embassy of the Kingdom of the Netherlands in Tirana.