Monitoring report on philanthropic activity in Albania during 2015 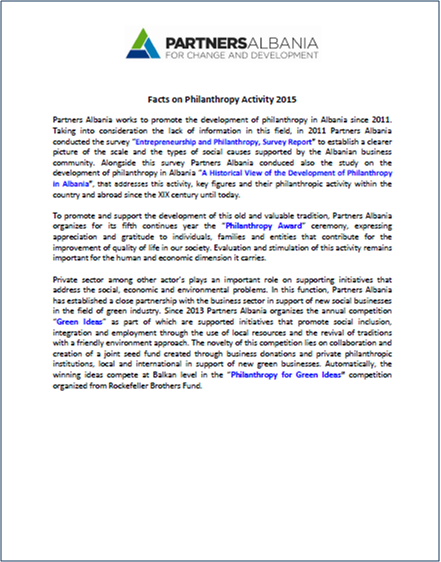 This report reflects the philanthropic activity in Albania during 2015, launched in a synthesized way from Partners Albania, based on daily monitoring and monthly public reporting. The report analyses the main sectors and issues supported, nature and value of the donations, geographic coverage and also the nature of donors and beneficiaries.
Through this monitoring Partners Albania aims to increase public awareness on philanthropic activity and to inform all the involved and interested actors about its social value and impact.

The monitoring process is based in media research, including social media and also information resources from the public and non-public institutions.

Media is the main tool to promote donations carried out and awareness campaigns, with 116 cases out of 217 identified during 2015. Apart from printed and electronic media, it is noticed that the social media has played an important role in promotion of philanthropy.

Meanwhile the second source of information’s are the official websites of the public institutions, through which they promoted and reported 101 cases of donation.